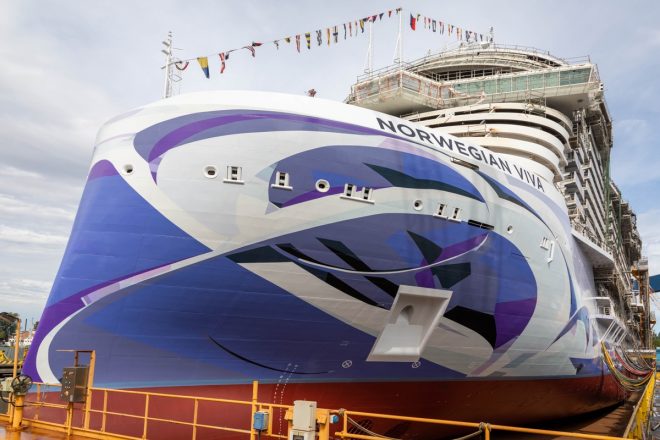 “Norwegian Viva”, the second of six vessels from Norwegian Cruise Line’s (NCL) new Prima Class of ships was floated out of the shipyard in Marghera (Venice) today, only a few days after the delivery of “Norwegian Prima“, the first Prima Class vessel on July 29.

Along with her sister-ships, “Norwegian Viva” will form the backbone of the future NCL fleet, at more than 142,500-tons, almost 300 meters long, and accommodating 3,215 guests. Deliveries are scheduled through 2027.

The Prima Class is based on a prototype project developed by Fincantieri, which enhances the consolidated features of NCL’s signature offering of freedom and flexibility, qualified by an innovative configuration for an elevated passenger experience. In addition, focus was set on energy efficiency, with the twofold aim of optimizing consumption at sea and reducing environmental impact, compliant with all the most recent regulations on this matter.

NCL is part of Norwegian Cruise Line Holdings Ltd., the U.S.-based company, which is one of the world’s leading cruise operators. Besides NCL, Norwegian Cruise Line Holdings Ltd. operates the Regent Seven Seas Cruises brand, to which Fincantieri will deliver next year in Ancona a third luxury cruise ship, “Seven Seas Grandeur”, after “Seven Seas Explorer” (2016) and “Seven Seas Splendor” (2020), as well as Oceania Cruises, for which the Group has in its orderbook two new-generation cruise ships which will start the “Allura-class”.