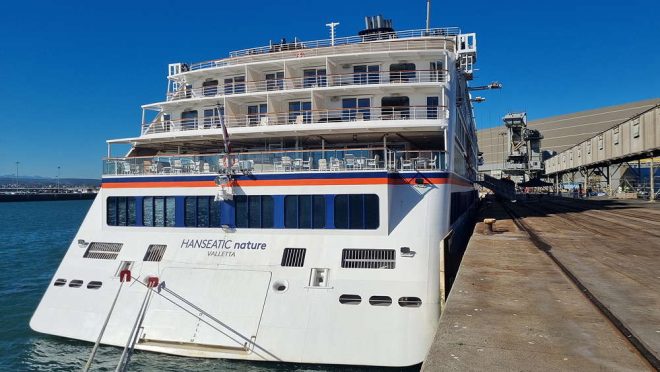 The Hanseatic Nature, owned by the shipping company Hapag Lloyd, called at the Port for the first time with 116 passengers and 151 crew members on board.

The regional and local authorities presented a plaque to the captain to commemorate the vessel’s first visit to Cantabria.

The luxury cruise ship, Hanseatic Nature, consigned by Marmedsa and owned by Hapag Lloyd, docked last October 7 at the Raos 2 dock of the port of Santander at eight o’clock in the morning on its first visit, arriving from Cherbourg, France. The ship, with 116 passengers and 151 crew on board, remained berthed until five o’clock in the afternoon, when it left the port to continue its itinerary to the Portuguese port of Leixoes.

To commemorate this first call and as a tribute to the ship’s first visit to the region, the President of Cantabria, Miguel Ángel Revilla, presented a commemorative plaque to the captain of the Hanseatic Nature, Ulf Sodemann, as well as a collection of books about Santander and Cantabria for the library on board. Also taking part in the ceremony were the Director General of Tourism, Marta Barca; the Councillor for Social Revitalisation of Santander City Council, Lorena Gutiérrez; the President of the Santander Port Authority, Francisco Martín; and the Director of the Port Authority, Santiago Díaz Fraile.

The arrival of the first luxury cruise ship of the season is „a symptom of the recovery of cruise tourism, an industry with high purchasing power that contributes to the ‘deseasonalization’ of tourism“ according to Francisco Martín, president of the Port Authority of Santander (APS). And he added „in such a complicated year due to the pandemic, it is magnificent news that we have new clients who have decided to call at our port“.

Martín also pointed out that both the crew and the passengers visited the Autonomous Community with „compliance with all the health measures established“, both by the shipping company and by the national and local authorities.

The Port Authority of Santander continues in its work to recover cruise tourism prior to the pandemic, with the intention of expanding this type of tourism in the immediate future. In this sense, Javier López Marcano, Minister of Industry, Tourism, Innovation, Transport and Trade of the Government of Cantabria, has highlighted „the alliance“ formed by the APS, the Government of Cantabria and the City Council of Santander under the brand Santander Cruise Deluxe, which aims to promote Cantabria as a cruise destination, presenting the region as „a safe, sustainable and innovative destination“ for both the more experienced cruiser and for those who are new to this way of travelling. Marcano has highlighted „the effort“ that is being made „to try to capture a good part of the annual cruises that sail through the Bay of Biscay, mostly with origin or destination of the port of Southampton, UK“.