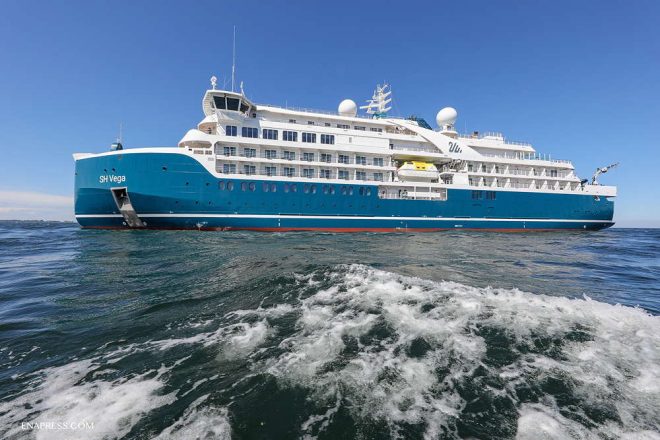 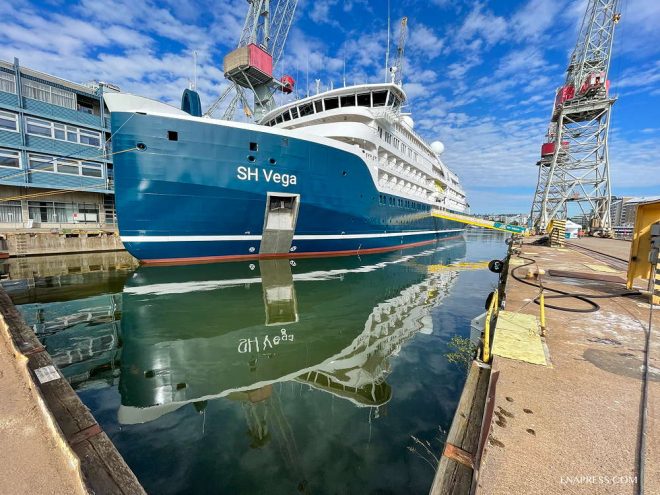 Today, Monday the 11th of July 2021, Swan Hellenic announced that the Naming Ceremony of its second ice-class cultural expedition cruise ship, SH Vega, had taken place at Helsinki Shipyard. The ship is now on her way to Norway and her first cultural expedition cruise of the Arctic, an 11-day exploration of the Svalbard Archipelago, departing Tromsø on the 20th of July 2022.

The purpose-designed new vessel was named by Patrizia Zito née Passalacqua, wife of Swan Hellenic CEO Andrea Zito, in the presence of Helsinki Shipyard Senior Management, the media and members of the cruise and travel industries from around the world.

SH Vega is the second in a series of three elegant, high ice-class, cultural expedition cruise vessels made for premium discovery experiences worldwide, with a strong bias for extreme latitude areas. SH Vega features a 5-megawatt diesel-electric propulsion system with selective catalytic reduction and a PC5 ice-strengthened hull with extra-large stabilisers for exceptional passenger comfort. At 113 m, the 10,600-ton vessel has been specially designed to explore the most inspiring and inaccessible places on the planet.

SH Vega, like her twin sister SH Minerva, has been designed to meet the latest environmental regulations and is completely self-sufficient for up to 40 days or 8,000 nautical miles. Preparations have been made to implement battery technology which would also make it possible to operate silently. The vessels are equipped with exhaust gas cleaning, advanced wastewater treatment systems and the waste storage facilities required for operating in sensitive polar areas.

Providing spacious 5-star accommodation for 152 guests in 76 spacious staterooms and suites, the vast majority with large balconies, SH Vega is operated by an onboard team of 120 to provide the highest levels of personal service.

Soon after the ceremony, she set sail from Helsinki to Tromsø, Norway, for a season of maiden cruises exploring the magic of the Arctic, from the Svalbard Peninsula and Iceland’s landscapes of ice and fire to Greenland’s dramatic majesty, the Northwest Passage and the wilds of Northern Canada. Then, come late Autumn, she’ll make her way down the U.S. East Coast over 12 days, taking in everything from New York, Norfolk and Charleston to Miami. From November, she’ll be offering a range of 11 to 21-day cultural expedition cruises of Antarctica through until March 2023, when she sails up the West Coast of Africa to the Canary Islands and Western Europe, also immersing guests in the Celtic lands of Britain and Ireland on the way to her second Arctic season. This will end with a crossing from Greenland to Nova Scotia, followed by the Caribbean and then Brazil in October 2023.

SH Vega sailed from Helsinki in the expert hands of industry veterans Captain Tuomo Leskinen and Hotel Director Philipp Reutener, who created the acclaimed Swan Hellenic onboard experience on SH Minerva and will ensure the same distinctive high standards are consistently maintained on her sister ship.

Executive Chef Avhier Singh brings experience in high-end hotels and cruise companies. But even more importantly, he also comes across from SH Minerva, where he brought to life the varied menus of freshly cooked delicacies that include original Italian and Asian fusion dishes created for the iconic company by award-winning Consultant Chefs Andrea Ribaldone and Sang Keun Oh.

After the Naming Ceremony, Helsinki Shipyard Project Manager Jonas Packalén commented: “This is a proud day for us all. SH Vega is every bit as beautiful and elegant as her twin sister! We wish her and her crew fair winds and following seas, with special thanks to everyone involved in the project for their unstinting dedication!”

Swan Hellenic CEO Andrea Zito added: “I would like to congratulate everyone at Helsinki for their superb work in creating this wonderful new ship. We are delighted with the quality of their work, creating another unique presence on the waves, and very much look forward to taking her first guests to see what others don’t, exploring the Arctic in exceptional comfort and style.”

SH Minerva and SH Vega will be joined early next year by the slightly larger SH Diana, which is already under construction at Helsinki Shipyard.